This April the 12th is the 56th anniversary of the pioneering orbital flight of Yuri Gagarin and the 36th anniversary of the first flight of America’s first Space Shuttle. Join the members of the Clear Lake Area National Space Society and Moon Society Chapter as we celebrate these milestones at Anita’s place in Nassau Bay near the Space Center. Snacks, refreshments, adult beverages, and good conversation!

Send an RSVP email to info@nss-houston-moon.org and we’ll reply with the full address and detailed directions to Anita’s home. Even if you’ve been there many times before, please do drop us a line so we have a good idea of whom to expect. We hope to see you there!

UPDATE 2017-04-08: Anita has given us permission to put her address on the website, so we can say that the party is at 18506 Upper Bay Road in Nassau Bay, Texas. It’s across NASA 1 from the Space Center and down the street a few blocks. Upper Bay Road is the next major intersection (stop light) east of the Saturn Lane main entrance to the Space Center on NASA 1. RSVP emails to the above address are still appreciated, but we hope to see you there! 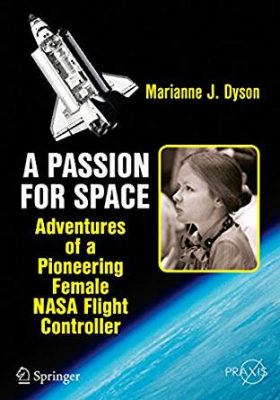 Our chapter’s own Marianne Dyson, former NASA flight controller and long-time Board member, is also a well-known science fiction and space author. Her memoir A Passion for Space has been selected by Amazon for their March 8th Kindle Daily Deal in conjunction with International Women’s Month. The regular list price of the book is $39.99; the Daily Deal price for the eBook will be only $3.99…90% off! (See Marianne’s web site if you’d like to purchase an autographed hard copy of her book at her regular selling price.)

I’d also like to mention that as of right now Marianne has a short story published in the current issue of Analog, available at Barnes & Noble and other good bookstores and newsstands.

[NOTE: This notice and the associated e-mailing are presented as a courtesy to our member Marianne Dyson. The Clear Lake Area Chapter is a 501c3 nonprofit and is receiving no compensation either for posting this message or from sales of these works.]

The Clear Lake Area Chapter held a very successful meeting the evening of February 27th, 2017. There were several new faces present and some important business was transacted. As originally discussed in our meeting last October, some bylaws changes were made which were intended to formalize the update process in the future and also to open up some director positions for increased participation. The detailed update is here with text being struck in and new text which was adopted in green. The complete text is posted on our “About the Chapter” page.

In other Chapter news, advance planning has begun for a “Yuri’s Night” party on Wednesday, April 12th and for our second summer social and pool party on Saturday, July 8th. Details are still being confirmed, but if you want to be sure to receive the notification then sign up for our Chapter Events mailing list using the form in the sidebar!